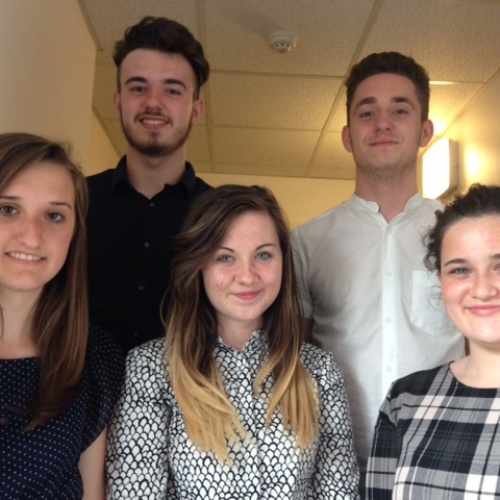 Students and staff of Robert Napier have elected a new Head Girl and Head Boy for the new school year. Hannah Braxton and Connor Botterill, with the help of a newly formed Junior Leadership Team, were successfully elected and have already begun work for the school community in earnest.

There were more candidates than ever for the two posts with a number of stages to pass through before whole school campaigning could begin. Candidates were asked to apply in writing and were invited to be interviewed by Mr Minchin and Mr Leadbetter to discuss their vision of what the JLT could offer to the school and how they could effectively lead the team. The following students emerged successfully from this initial process.

The five were now given the task of beginning their election campaign, starting by canvassing the school during break and lunch to gain student opinion and support. They were also required to produce a short video to be shown in assemblies to help the electorate decide who to vote for.

Christina and Victoria decided to campaign as a joint effort and spoke about their desire to see more student work displayed around the school in particular some of the fantastic art and photography work that has been done.

Hannah’s campaigned for a change to the reward system including more educational trips throughout each and every department to make learning more fun and interactive.

Drew talked to students about his plans for a seated area on the field where students could relax and eat their lunch in the fresh air. He planned for refreshments to be on sale and the money raised could be spent on projects around the school.

Congratulations must go to Hannah and Connor and also to Christina, Victoria and Drew who have formed the JLT and have already contributed to a JLT that is committed to working for the RNS Community.