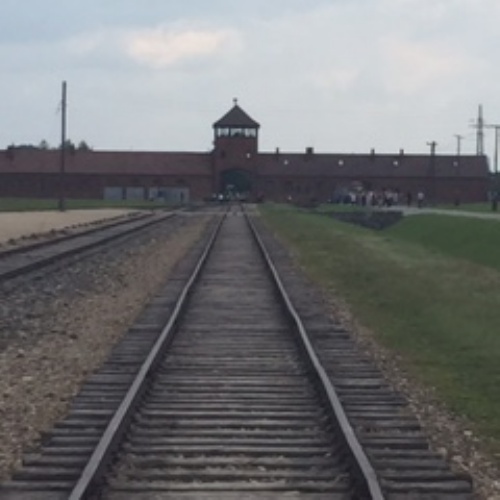 Robert Napier GCSE students embarked on our biennial pilgrimage to Auschwitz-Birkenau at the end of June.  This visit consolidated their understanding of the Nazi racial policies in Poland during the Second World War.

Robert Napier GCSE students embarked on our biennial pilgrimage to Auschwitz-Birkenau at the end of June.  This visit consolidated their understanding of the Nazi racial policies in Poland during the Second World War.

We were greeted by our knowledgeable, and fluent in English, guide who impressed us with new facts and stories that brought early twentieth century Krakow to life.  Our students experienced a Jewish synagogue, the streets where Schindler’s List was filmed and the Krakow ghetto.  We were moved by stories of bravery in the ghetto and the lasting reminder of this time left by nearly 70 chairs; each representing 1,000 Jews from Krakow.

The main focus of the visit was a tour of Auschwitz-Birkenau followed by the personal story of a survivor.  Auschwitz-Birkenau opened our students’ eyes to the reality of the holocaust as they saw for themselves just a small percentage of the belongings left by prisoners.  The students were given time to reflect and ask questions whilst stood on the infamous station platform at Birkenau.  On the day it was a calm and pleasant atmosphere, but we were reminded this was far from the reality of this once terrifying place.  After seeing the memorial for themselves, our students were given time to reflect further and hear the emotional story of one lady’s two years at Auschwitz-Birkenau; told with such bravery.

Our last stop, before returning home, was Oscar Schindler’s factory; now a museum that tells the story of Krakow during the Second World War.

The visit was a thought provoking and emotional experience for all.  However, we were all able to enjoy our evenings in the beautiful medieval centre of Krakow; a meal in Hard Rock Café, shopping under the cloth hall and a relaxing coffee overlooking the square.

I hope that our students will share their experience with others so that the history of the holocaust is remembered and remains an event that we work hard to ensure is never repeated.  The History Department are looking forward to offering this trip to our GCSE students in the future.